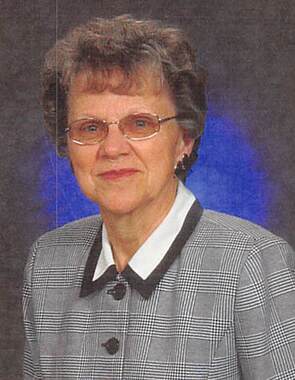 Back to Marilyn's story

Marilyn Caylor, 86, of Des Moines, Iowa went home to be with the Lord on December 3, 2019.
She was born on July 7, 1933 near Udell, Iowa to Frederick and Icel (Boyer) Koehler.
On June 7, 1954, she was united in marriage to her childhood sweetheart, Richard "Dick" Caylor.
Marilyn was a member of the Grace Tabernacle Baptist Church in Centerville, Iowa. She enjoyed cooking, farming,
selling Tupperware, designing flower arrangements and traveling.

Marilyn is survived by her daughter, Debbie Gilbert of Anchorage, Alaska; son, Barry (Rhonda) Caylor and daughter-in-law, Kym Caylor,
both of Centerville; four grandchildren: Kristi (Dave) Jones and Kelly (Robert) Palmer, both of West Des Moines, Neal Caylor and Emily Caylor,
both of Centerville; two great grandchildren: Kaden and Braydon and two siblings: David (Marilyn) Koehler of Udell and Donna Maurer
of Ankeny.
She was preceded in death by her husband, Dick; sons: Dale (in infancy) and Danny; son in law, Steve Gilbert and her parents.
Funeral services will be held at 10:00 a.m. on Tuesday, December 10, 2019 at Thomas Funeral Home in Centerville with Pastor Terry Wilhite
officiating. Interment will immediately follow at Fairview Cemetery in Unionville. Visitation will take place one hour prior to the funeral from
9:00-10:00 a.m.
In lieu of flowers, memorial contributions may be made to the Alzheimer's Association and online condolences may be shared at
www.thomasfh.com or facebook.com/thomasfuneralhome.
Published on December 5, 2019
To plant a tree in memory of Marilyn Caylor, please visit Tribute Store.

Plant a tree in memory
of Marilyn

A place to share condolences and memories.
The guestbook expires on March 04, 2020.

Cousin Janelle sends her loving support and lots of hugs to Debbie and Barry and family. I'm so glad I was able to visit Aunt Marilyn a few times and have fond memories of visiting on the farm in Udell.

Kathy Wellman
Precious memories, how they linger. The song says it all. I have many memories of Marilyn, as the mom of my dear friend, Debbie. I loved going to her house, and I was always made to feel welcome. My prayers go out to the family.
View all