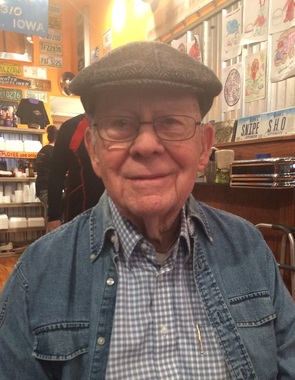 Back to Myron's story

Myron DeVore, 93, of Centerville, Iowa passed away on May 23, 2019 at Mercy Medical Center Long Term Care in Centerville. Myron was born on March 27, 1926 in Seymour, Iowa to Andrew and Wilma (Hawkins) DeVore.
Myron attended grade school in Missouri and graduated from Seymour High School in 1944. Upon graduation, Myron served two years in the United States Navy where he was stationed in the Hawaiian Islands. At the conclusion of WWII, Myron moved back to the Midwest and attended AIB College of Business, formerly known as American Institute of Business in Des Moines.
On August 11, 1946, Myron married Darlene Fortune and to this union, three children were born. He served as an accountant at the Ford Agency in Earlham, Iowa and then bought into the Ford dealership and was a car dealer for 10 years. Myron was recognized as one of the top dealers in the country and also served on the Ford Motor Board with Henry Ford. Later, he sold his interest to Hunter Motor and purchased Parks and Brunt Ford-Mercury dealership in Centerville. Myron would later establish DeVore Chevrolet where he remained until his retirement in 1998.
In his spare time, Myron enjoyed: fishing, bird hunting, deer hunting, boating and water skiing. He was also very active in the community as he was chairman of the Centerville College Committee, a member of the Shriners, American Legion, Masonic Lodge, Lion's Club and Rotary. He was a guardian member of the Boy Scouts and assisted with developing the old shopping center in Centerville. Myron was also instrumental in creating the Industrial Park southeast of Centerville. He served on its board and was also active as President.
Myron is survived by his children: MyRae Migliazzo (Sam), Pam DeVore (Ross Busby) and Tom DeVore; nine grandchildren; 15 great grandchildren; brother, Quentin A. DeVore and numerous extended family members. He was preceded in death by his parents; wife, Darlene in 2010; grandson, Carl Migliazzo; sister, Mary Lou Havens and brother-in-law, Howard Havens.
Funeral services will be held at 1:00 p.m. on Thursday, May 30, 2019 at Thomas Funeral Home in Centerville. Interment will immediately follow at Oakland Cemetery in Centerville. Visitation will take place one hour prior to services from 12:00 -1:00 p.m. Memorials may be made to First Presbyterian Church or Mercy Medical Center Long Term Care and online condolences may be shared at www.thomasfh.com or facebook.com/thomasfuneralhome.
Published on May 27, 2019
To plant a tree in memory of Myron DeVore, please visit Tribute Store.

Plant a tree in memory
of Myron

A place to share condolences and memories.
The guestbook expires on August 25, 2019.