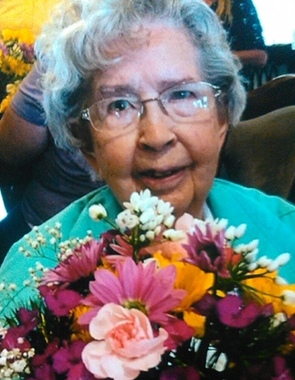 Back to Norma's story

Norma Elaine Hoover Reece, of Nyssa, Oregon, went to be with the Lord on Monday, March 25, 2019.
Elaine was born December 1, 1927 in Cincinnati, Iowa the oldest daughter of Nova Fowler and Inez Myers Fowler. Her siblings include Dixie Stephenson of Seymour, Iowa, Dennis Fowler of Nyssa, Oregon, Jennie Smaniotto of Seymour, and the late Deon Smaniotto, also of Seymour.
After graduating as valedictorian from Cincinnati High School, Elaine went to Des Moines, Iowa, where she attended business school and worked. Returning to Centerville, she worked for Carmer's Auto Dealership as their secretary.
Elaine married Robert Hoover on June 29, 1946 in Centerville, Iowa. They had three children, who they raised in Centerville. Elaine worked as a bookkeeper, and was a Sunday school teacher, active in Christian Women's Fellowship, and the financial secretary at Drake Avenue Christian Church. She was an avid gardener, prolific canner, loved to fish, camp, cook, and sew. In later years, Elaine crafted over seventy beautiful, treasured quilts for friends and family, as well as wall hangings, Christmas decorations, pillows, and table runners.
After Bob passed away, Elaine moved to Nyssa, Oregon and married Lyle Reece on February 9, 1996. Elaine and Lyle loved to camp on the Snake River in their fifth-wheel trailer, and spend time at their cabin on Unity Lake, accompanied by their many pets, grandchildren, and great-grands. They spent many content hours there with Lyle fishing while Elaine sewed.
Elaine is survived by three of her siblings, Dixie, Dennis and Sharon, and Jennie, and her three children, Bob Hoover and Sandy of Rapid City, South Dakota, Dixie Boylan of Nyssa, Oregon, and Jesse Hoover and Diane, of Seymour, Iowa. Elaine has four grandchildren: Todd Hoover and wife Sally, of Newcastle, Wyoming, Jessica Hiatt and husband Everet of Nyssa, Oregon, Jeannie Prozanski and husband Donnie, of Nyssa, Oregon, and Diana Kaufman and husband Olaf, of West Des Moines, Iowa. Elaine has ten great grandchildren: Caleb, Gabe, and Eli Hoover; Jonah, Maggy, and Emma Hiatt; Hope Prozanski; and Rowan, Elin, and Isla Kaufman. Elaine also is survived by many nieces and nephews.
She was preceded in death by her husbands, Bob Hoover and Lyle Reece, her parents, a sister, Deon Smaniotto, a nephew, Leo Smaniotto, a son-in-law, Calvin Boylan, and a great-granddaughter, Abigail Elaine Hiatt.
A graveside service will be held at 11:00 a.m. on Saturday, July 6, 2019 at Oakland Cemetery in Centerville.
Published on June 24, 2019
To plant a tree in memory of Norma Reece, please visit Tribute Store.

Plant a tree in memory
of Norma

A place to share condolences and memories.
The guestbook expires on September 22, 2019.